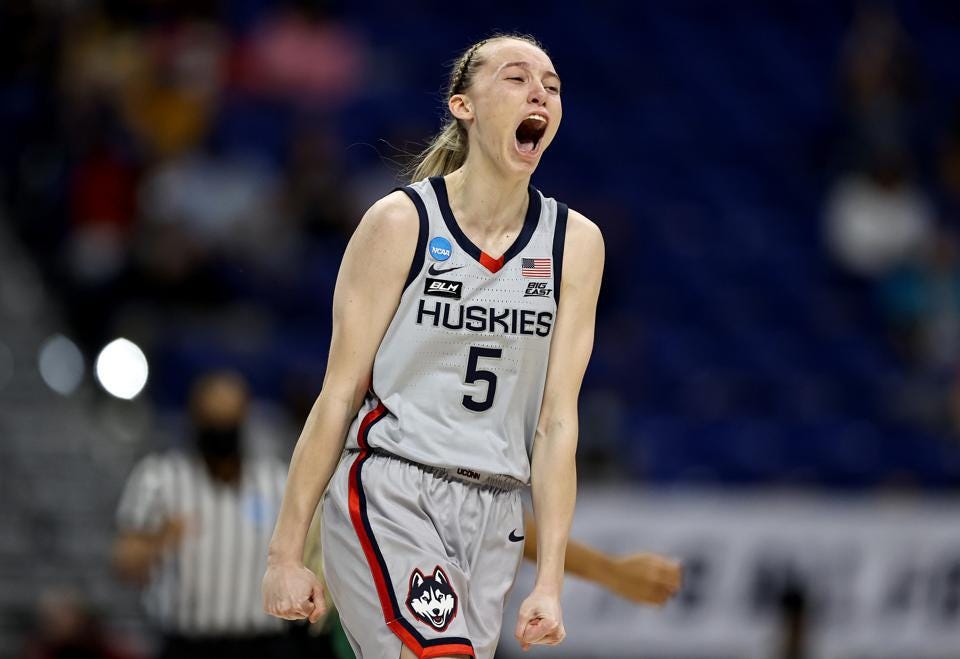 Paige Bueckers of the UConn Huskies celebrates her three point basket in the first quarter against the Baylor Lady Bears during the Elite Eight round of the NCAA Women’s Basketball Tournament at the Alamodome on March 29, 2021 in San Antonio, Texas.

University of Connecticut basketball star Paige Beuckers announced a new partnership Monday that’s sure to add to her buckets of cash off the court.

The reigning Naismith College Player of the Year is partnering with Cash App, the mobile payment service owned by Jack Dorsey’s Block (formerly Square), to help launch the Paige Bueckers Foundation. Although specific details have yet to be released, the foundation will broadly focus on creating opportunities for children and families and promoting social justice. Cash App plans to endow an initial $100,000 Bitcoin donation, in addition to $100,000 in cash that will be given away to fans in $15 payments to promote the announcement. Other financial terms were not disclosed, but Forbes estimates that Bueckers is still a few deals away from hitting the $1 million mark in endorsements.

“I know this deal isn’t like a super long-term contract,” Bueckers tells Forbes. “But I’m working with people and want to work with people who have the same values as me.”

This marks Bueckers’ third major partnership since the NCAA stripped down its regulations in July, allowing college athletes to profit off their name, image and likeness. She signed with global e-commerce platform StockX in October and, one month later, became the first college athlete to join Gatorade’s ranks. In July, Bueckers trademarked the phrase “Paige Buckets,” which is the point guard’s nickname.

How Bueckers fares in the nascent NIL market could offer a glimpse of the opportunities emerging for the top tier of college athletes. Based on her sprawling social media presence—Bueckers has more than one million followers between Twitter and Instagram—a study from research outlet AthleticDirectorU named her the most marketable athlete in college sports prior to the NCAA’s rule change.

“She is the best of the best, and these major brands want to leverage her appeal, particularly to a young and growing demographic,” Carnegie Mellon Tepper School of Business associate professor Tim Derdenger wrote in an email. “Her success will certainly spill over to other players.”

It already has. Last month, Gonzaga forward Chet Holmgren signed a deal with Topps that the company said was its largest with a college athlete to date. Fresno State basketball players and TikTok stars Haley and Hanna Cavinder recently cofounded a streetwear clothing company in addition to striking partnerships with Boost Mobile, Champs, Eastbay and WWE.

The addition of Bueckers rounds out an impressive roster for Cash App, which has signed up a handful of high-profile athletes in the last few months. In November, Los Angeles Rams wide receiver Odell Beckham Jr. and Green Bay Packers quarterback Aaron Rodgers announced they were partnering with Cash App and taking part of their salaries in Bitcoin. Golden State Warriors stars Klay Thompson and Andre Iguodala said they would be doing the same in January. As cryptocurrency becomes a hot topic among athlete investors, at least ten North American-based professional athletes have taken part of their salaries or endorsement payments in some form of crypto.

“Obviously, I’m still learning a lot about it and trying to understand,” Bueckers says. “I just started understanding what to do with my tax money, so now I have to learn what to do with Bitcoin and cryptocurrency.”

A native of Hopkins, Minnesota, Bueckers arrived at UConn in 2020 as the top-ranked recruit in the United States and the 2019-20 Gatorade Female Athlete of the Year. She collected a string of awards during her freshman season and led the heavily favored Huskies to the Final Four, where they were upset by the University of Arizona. Bueckers picked up where she left off during her sophomore campaign before suffering a fracture in her left knee, which has sidelined her for the last two months. She hopes to return at the end of February.

As she adds to her sponsorship portfolio, Bueckers plans to continue to use her platform to advocate for racial equity. At the 2021 ESPYs, where she won the award for best college athlete in women’s sports, Bueckers used her speech to honor and celebrate Black women. She’s adamant about including BIPOC creatives in anything she does. “I grew up with everything, a roof over my head and food on my plate,” she says. “I want to help younger kids that weren’t as fortunate as me.”

This is likely just the start.

“The current set of offers is just the tip of the iceberg,” Derdenger says. “She has a lucrative future ahead of her.”