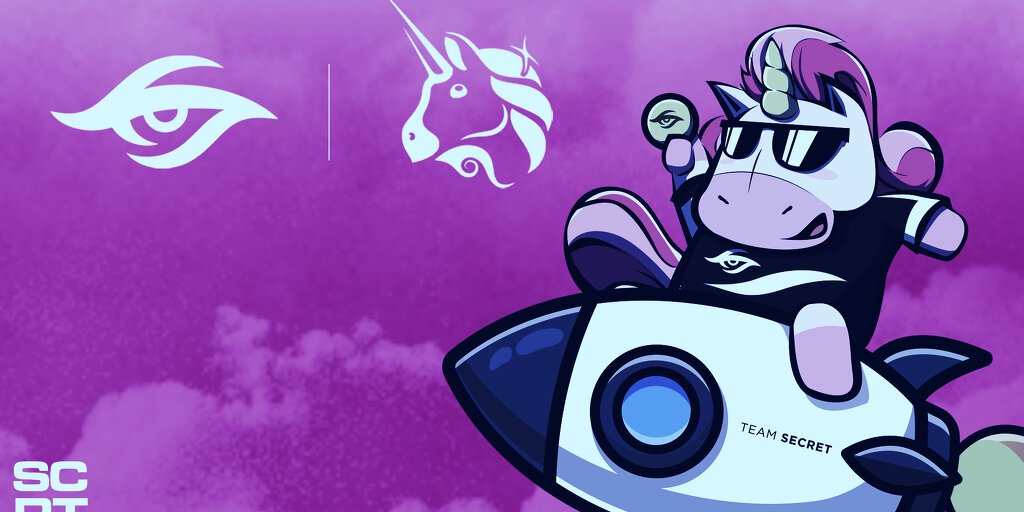 Uniswap has announced a partnership with esports organization Team Secret. The deal comes via a $112,500 grant awarded via community voting.

You might catch the familiar Uniswap unicorn logo in an unfamiliar place soon: esports competitions, player jerseys, and video game streams. That’s because the Ethereum-based decentralized exchange (DEX) today announced a partnership with Team Secret, an esports organization that competes across several games.

According to a news post from Team Secret, the organization will create educational content around Uniswap and cryptocurrency, as well as develop esports industry activations for the partnership. Team Secret CEO John Yao is quoted as saying that the team is exploring investing in cryptocurrency to hold on its balance sheet, as well, following similar moves from firms such as Tesla and MicroStrategy.

Coinbase recently announced a partnership with esports team Evil Geniuses, along with sponsorship of Counter-Strike: Global Offensive competitions from tournament operator BLAST. However, Coinbase is a centralized exchange that is operated by a public company, whereas Uniswap is not.

Uniswap is the leading decentralized exchange on Ethereum, at times even rivaling trading volumes on Coinbase, and plays a crucial role in the decentralized finance (DeFi) space. “DeFi” is essentially shorthand for a group of financial services, mostly on Ethereum, that operate without third-party intermediaries. For example, on trading protocols such as Uniswap, all the buying and selling happens peer to peer, without a third party ever having control of the funds.

Uniswap recently launched its v3 upgrade, an updated version of its DeFi protocol for token swaps and liquidity pooling. The exchange also operates through community-driven governance, including voting by UNI token holders.

Team Secret’s journey to the Moon 🚀

We are pleased to welcome our new partner @Uniswap to the Secret Fam! 🖤

Uniswap’s decentralized tech paves the way for a brighter future in crypto. For the HODLers and those who paperhand a 2-0 Finals lead👀

The sponsorship was awarded through the Uniswap Grants program by Uniswap’s decentralized autonomous organization (DAO) and first revealed on May 12, although the partnership was only officially announced today. According to the voting announcement, Team Secret was awarded $112,500. A note alongside the grant award states, “The first time in history a DAO sponsors an esports team? Won’t be the last,” alongside a winking emoji.

The Uniswap Grants program primarily provides funding to developers that build tools around Uniswap. However, one pillar of the program is for “Community” projects focused on “growing the ecosystem,” and a sponsorship of a popular team with plans for educational content fits that bill. Decrypt has reached out to both Uniswap and Team Secret for further details on the partnership.

Founded in 2014, Team Secret is best known for its successful Dota 2 squad. That team has earned nearly $11.6 million in prize money alone, according to Esports Earnings, making up the vast majority of Team Secret’s competition winnings to date. Team Secret also fields squads in Rainbow Six Siege and League of Legends, along with mobile games League of Legends Wild Rift and PUBG Mobile. The team also recently announced a partnership with blockchain-centric gaming infrastructure startup, DMScript.

The Uniswap community is currently voting on whether to allocate 1 million UNI (about $26.6 million) to a “political defense” lobbying fund proposed by the Harvard Law Blockchain & FinTech Initiative (HarvardLawBFI). As of this writing, more than 60% of votes are in favor of the proposal ahead of a June 5 deadline for the current Consensus Check stage. If successful, then the voting process will enter the final stage with a formal Governance Proposal.