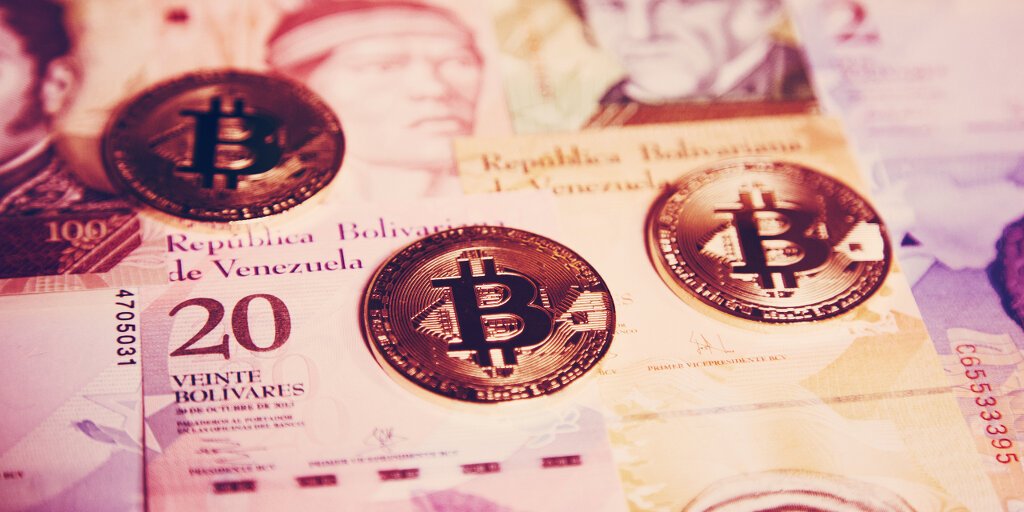 Venezuela’s largest bank has teamed up with crypto financial services startup Glufco. The partnership enables the purchase of dollar-pegged stablecoins through the state’s biometric payment system, Biopago. It could prove to be a useful onramp for other crypto purchases.

In Venezuela, citizens will soon be able to buy cryptocurrency directly from state welfare accounts.

Thanks to a collaboration between the nation’s largest, state-owned bank and financial services startup Glufco, Venezuelans can now purchase Glufco’s dollar-pegged stablecoin through the same infrastructure that powers the country’s biometric payment system, Biopago, using funds distributed by the state.

The Biopago platform plays a vital role in Venezuela’s financial landscape. The Venezuelan government uses it as a bridge between the Bank of Venezuela and the country’s Patria system, which it uses to distribute bonds, manage remittances (including those made with cryptocurrency), and dole out state relief funds (similar to stimulus checks).

Now, Venezuelans can take those state relief checks and immediately exchange the funds for Glufco tokens, which are pegged to the US dollar. What it means is two-fold: first, it provides Venezuelans with yet another way to access dollars and protect themselves against the hyperinflation that the national currency, the bolivar, continues to suffer. And second, it gives residents of Venezuela a new on-ramp to crypto.

Citizens who make use of the Glufco integration can now acquire those dollar-pegged stablecoins quickly and easily, and then “subsequently trade them on another exchange for other cryptos,” such as Bitcoin, Litecoin, Dogecoin and Tether (USDT), Glufco COO Antonio Di Caprio told Decrypt.

But why would they?

It’s no secret that Venezuela’s financial situation is a mess. A mix of internal corruption and international sanctions have led the country to reach extreme levels of inflation, currency devaluation, and economic recession. One way citizens have sought to escape this is by ditching bolivars and buying up dollars, which up until very recently was technically illegal and purposely very difficult.

Another way has been through cryptocurrency, such as Bitcoin. According to a report from blockchain analytics firm Chainalysis last year, Venezuela ranks third among all countries in terms of crypto adoption. And it’s peer-to-peer Bitcoin trading scene is one of the most active in the world.

Top 10 countries with the most crypto adoption. Image: Chainalysis

The government of Nicolas Maduro, however, appears to have recently (and finally) accepted the fact that currency controls have only worsened the crisis and have decided to open up the country to some level of dollarization—that is, allowing for the US dollar to be used as the de facto currency of the nation.

Aside from lifting currency controls, Maduro’s government has also allowed for the opening of Venezuelan bank accounts with dollars. Given these recent policy changes, Venezuela’s central bank now teaming up with a crypto firm to make it easier for citizens to access dollar-pegged stablecoins appears to make sense.

The idea, it seems, is to allow them to protect themselves from both currency inflation and, potentially, Bitcoin volatility. After all, in a country where the minimum wage is less than $10, even the smallest fluctuation can have a dire impact on the most vulnerable population. Dollars (physical or digital) may offer the stability that many within the country seek.

Glufco’s stablecoin can currently be traded on small international exchanges, such as Waves, Graviex, and Vindax. There is also an OTC desk on the state-registered Criptolago exchange, where the stablecoin can be swapped for Bitcoin or bolivars.

The Glufco COO also noted that the Bank of Venezuela played a vital role in the development of this latest platform. The Bank did not respond to Decrypt’s request for comment.

Since first launching it’s “all-in-one” crypto platform (which included a digital wallet, payment gateway, and crypto exchange), Glufco has since rolled out crypto payments via SMS text message and payroll capabilities. It plans to release its point-of-sale terminals for in-person crypto purchases within the next two weeks.