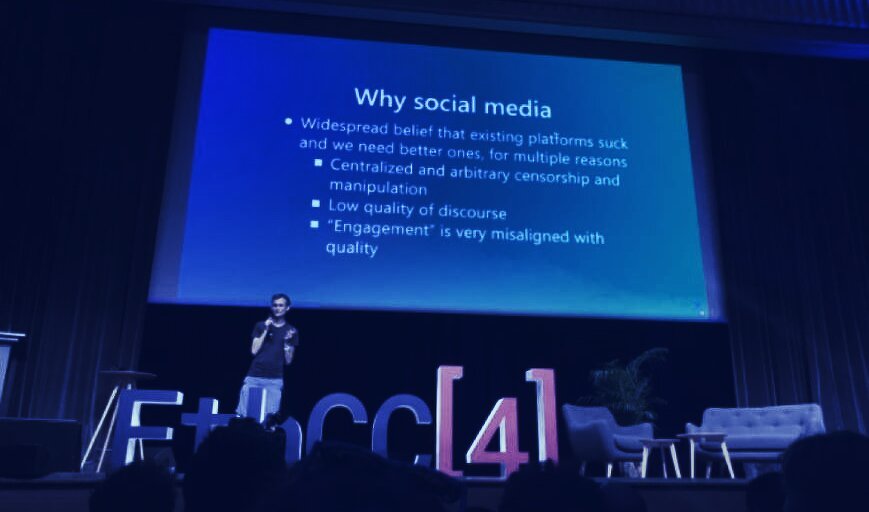 Buterin, 27, after a brief cross-legged meditation on stage before standing up to speak, said that Ethereum must be socially useful as well as financially beneficial, drawing a cheery response from an audience thrumming with DeFi entrepreneurs, investors and developers.

He complained, for instance, that much of Ethereum’s functionality is presently limited to a select few, singling out expensive gas fees as one particularly egregious example. “The degens can pay for it, the apes can pay for it, the orangutans can pay for it,” Buterin said, using niche DeFi jargon that refers to wealthy traders and DeFi obsessives. But a holistic Ethereum ecosystem won’t work, he said, if gas frees cripple the average user.

Meditating on the dream of an Ethereum that is useful to all, he expounded on several alternative approaches to the technology that he felt should merit more attention. One idea was “retroactive funding,” in which developers effectively build public infrastructure for free and then are paid for it when it yields dividends. He explained that such a process would allow Ethereum projects to flourish as a “public good.”

But the core of Buterin’s keynote laid out his hopes for Ethereum underpinning a new, ecumenical social media ecosystem that would encourage higher-quality posting and form the basis of users’ online identities. This would stand as a direct alternative to centralized social media networks, which he criticized for their rampant data harvesting and the “misaligned incentives” which reward cynical posters with high engagement, and likes.

At the heart of his proposed approach was the use of Ethereum wallets as multipurpose online identities that could be used to sign into a wide variety of Ethereum-based applications, similar to how Gmail and Facebook accounts are used. He said existing login providers like Google have a tendency to arbitrarily de-platform users, while often refusing to help those who have been locked out of their accounts.

Ethereum-based login options, on the other hand, would provide “credible neutrality,” censorship resistance, and a “built-in economic layer that makes it easier to do mechanism design.” He imagined social networks that only allowed vested members of an Ethereum DAO to post.

Riffing on the low level of social discourse he hopes Ethereum can help overcome, he read out some of the comments underneath various well-meaning, academic tweets he has put out in the past year. “When the bridge between #Doge and #NFTs?” read one. “Mate, Harmony $ONE, check it out,” read another.

“Why would they tell me that,” he asked the crowd, bringing the house down.

He also cracked wise about the high profile celebrity endorsements of NFTs and Ethereum. Kim Kardashian “was pumping Ethereum Max, so we should just cancel her,” he joked to wild applause.

Buterin’s broader point was that Ethereum developers need to take responsibility for the unsavory actions of a few vocal shills in the space. For instance, when attendees jeered at his reference to the proliferation of cynical Covid-related tokens in the wake of the pandemic, he joked darkly, “We’re not the problem—the problem is other people.”