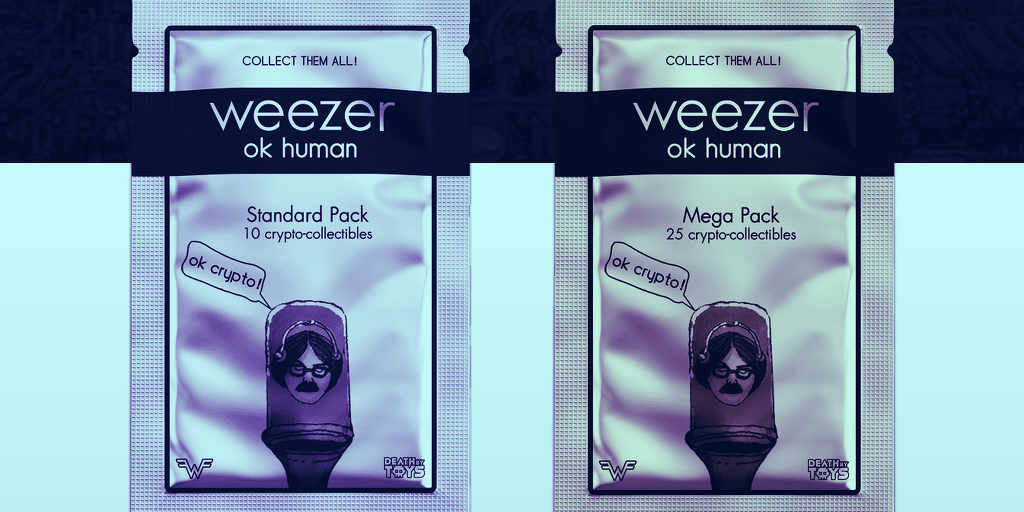 Rock band Weezer will launch a set of NFT collectibles on the WAX blockchain starting April 29. The set will include 12 “Ultra Rare” NFTs that can be exchanged for physical toys based on the band’s latest album.

Rock band Weezer announced today that it will join the recent barrage of musicians releasing digital collectibles as non-fungible tokens (NFTs). But unlike most, if not all, of those musicians, Weezer has opted against Ethereum in a favor of a competing network to mint its wares, explaining in a tweet that it would be “better for the environment.”

The NFTs will be released on the WAX blockchain and are based on the band’s most recent album, OK Human—but more specifically, they’re based on a limited run of physical toys inspired by the album, created by Death By Toys. According to Weezer’s Twitter, they “took the toys and turned them into digital collectibles so more people could get their hands on them.”

An NFT, for those who still don’t know, is essentially a deed of ownership for a digital item, whether it’s a still or animated image, video, tweet, video game item, music file, and more. NFTs are tokenized on a blockchain to provide provable scarcity and authentication, affording these digital items a rarity and collectibility that a typical image or video file does not have.

Weezer’s “OK Crypto” NFTs, set to launch on April 29, will include 12 core designs, each inspired by a different track on the album. Each NFT will have multiple variants at different rarity levels, including a single gold “Ultra Rare” version that can be redeemed to receive the physical toy it’s based on. The collection will be sold in packs of 10 NFTs for $20 or 25 NFTs for $40.

In a series of tweets, Weezer explained why it chose the proof-of-stake WAX blockchain—which has been used for other NFTs such as Topps’ Major League Baseball cards and Godzilla collectibles—over an alternative blockchain. Ethereum, one of the most popular blockchains for issuing NFTs, has been criticized for the environmental impact of its proof-of-work blockchain, which requires significant distributed computing power to operate. Ethereum’s high gas prices, essentially transaction fees charged for using the blockchain, were also a concern to the band.

“We want to make our first experience on the blockchain fun and accessible to everyone. You’ll be able to purchase using your credit card and it won’t include any of the gas fees (a.k.a. service fees) you may have heard about,” reads a tweeted image.

“WAX also uses 1% of the amount of energy that [Ethereum] and others use, so there are no issues there either,” it continues. “There are no auctions […] and you can use real money from a credit card, not Bitcoin. Very simple.”

Demand for NFTs has surged in 2021, with more than $1.5 billion in transaction volume in the first three months of the year, according to DappRadar. Many musicians have gotten in on the NFT craze, albeit in varying ways. Artists like The Weeknd, Grimes, Snoop Dogg, and Mick Jagger have released animated artwork or short videos, while rock band Kings of Leon launched its last album as an NFT.