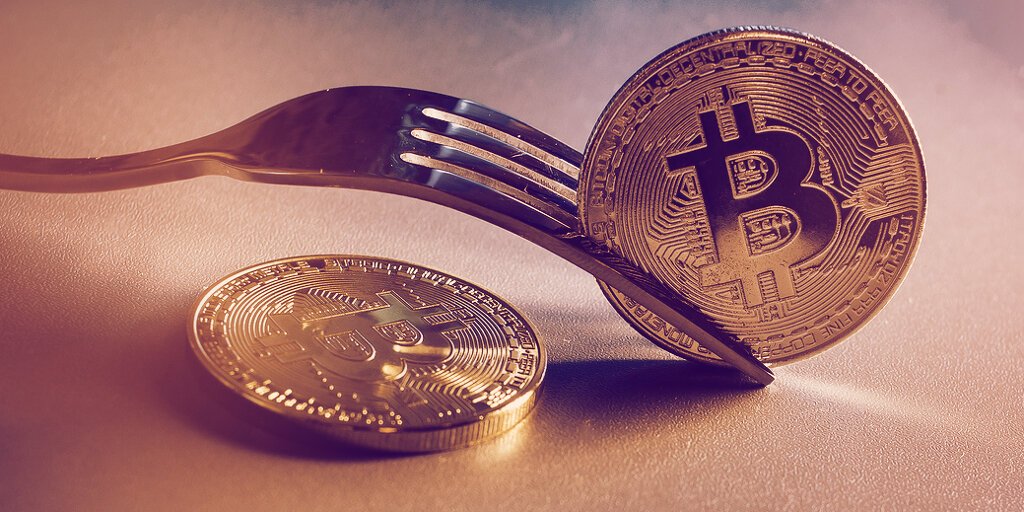 Earlier this month, the IRS issued new guidelines for tax obligations around Bitcoin forks, such as Bitcoin Cash. Per the new rules, you have to calculate taxes on forks as soon as you have “dominion and control” over the funds. There are some thorny implications.

Earlier this month, the IRS announced an update to its rules for how forked crypto is taxed, using Bitcoin Cash as a sample case.

Some context: in 2017, a new cryptocurrency called Bitcoin Cash (BCH) was spun off of the original Bitcoin blockchain in a development process called a “fork.” Since the split, BTC and BCH have operated on two distinct, incompatible blockchains. However much Bitcoin you held at the time of the fork was how much Bitcoin Cash you ended up with. The IRS has said for years that this is a taxable event, since you’re essentially getting free money.

What’s been less clear is when exactly those taxes kick in. The value of individual coins can fluctuate significantly from hour to hour; do you pay taxes on the value of your new tokens the moment you get them, or the moment you first transact them?

Now, the IRS has clarified that you have to pay taxes on the value of that forked crypto as soon as you have “dominion and control” over it—which is to say, as soon as you can actually move it around.

If you’re using an “unhosted” wallet (i.e. a wallet that’s not part of a centralized exchange like Coinbase), you’ll have dominion and control over your forked crypto as soon as it materializes. But Shehan Chandrasekera, a tax specialist at CoinTracker, told Decrypt that it doesn’t always work out so cleanly.

“Say you used a CEX [centralized exchange], but it took some time to support the coin after the fork,” he said. “In that case, you won’t have dominion and control until the exchange supports it.”

It’s not just a hypothetical: the Bitcoin Cash fork happened on August 1, 2017, but Coinbase didn’t support transactions with Bitcoin Cash until December 19, meaning customers didn’t have the ability to sell it. Before the 19th, according to Chandrasekera, the recipients of that forked crypto didn’t have dominion and control.

Jerry Brito, of the crypto lobbying group CoinCenter, said the new guidance raises some thorny questions about how taxable crypto is valued. The IRS memo looks at a hypothetical scenario around Bitcoin Cash: if you received BCH through the fork, and you have dominion and control immediately, you have to report ordinary income “equal to the fair market value” of your BCH at the exact moment of the fork.

“If you take that literally, at the moment the fork happened, you would think that the market value is zero,” said Brito. A cryptocurrency isn’t like a stock, which has extrinsic value—digital tokens are only worth something when they start trading, and Bitcoin Cash wasn’t trading until it started to exist.

He added that since the Bitcoin Cash fork was well-publicized, it’s possible there were futures markets that drove the value up ahead of time, but maintained that it’s difficult to know. A value of zero is probably not what the IRS has in mind, but valuing crypto remains dicey even in normal circumstances (Bitcoin trades at slightly different prices on different exchanges). How are taxpayers meant to parse that out?

Brito also said that since the vast majority of individual crypto holders have no control over whether or not their coins get forked, taxable events might just start happening to them whether they like it or not, as new forks are implemented. If you bought Bitcoin in 2013 and forgot about it, you received some Bitcoin Cash on August 1, 2017—even if you don’t know what a fork is, you have to pay taxes on that Bitcoin Cash.

Brito’s take is that the IRS should just tax forked crypto when it’s transacted for the first time. He explained it with a bovine analog:

“If you buy a cow, and the cow gives birth to some calves, you kind of have a fork, right? You have new calves—where you previously only have one, now you have several—you have accession to wealth. But the IRS doesn’t doesn’t count it as income the moment the calf is born. It’s treated as income when you take it to market and you sell it. It’s the same thing.”

For now, though, taxpayers will have to make do with existing guidance.