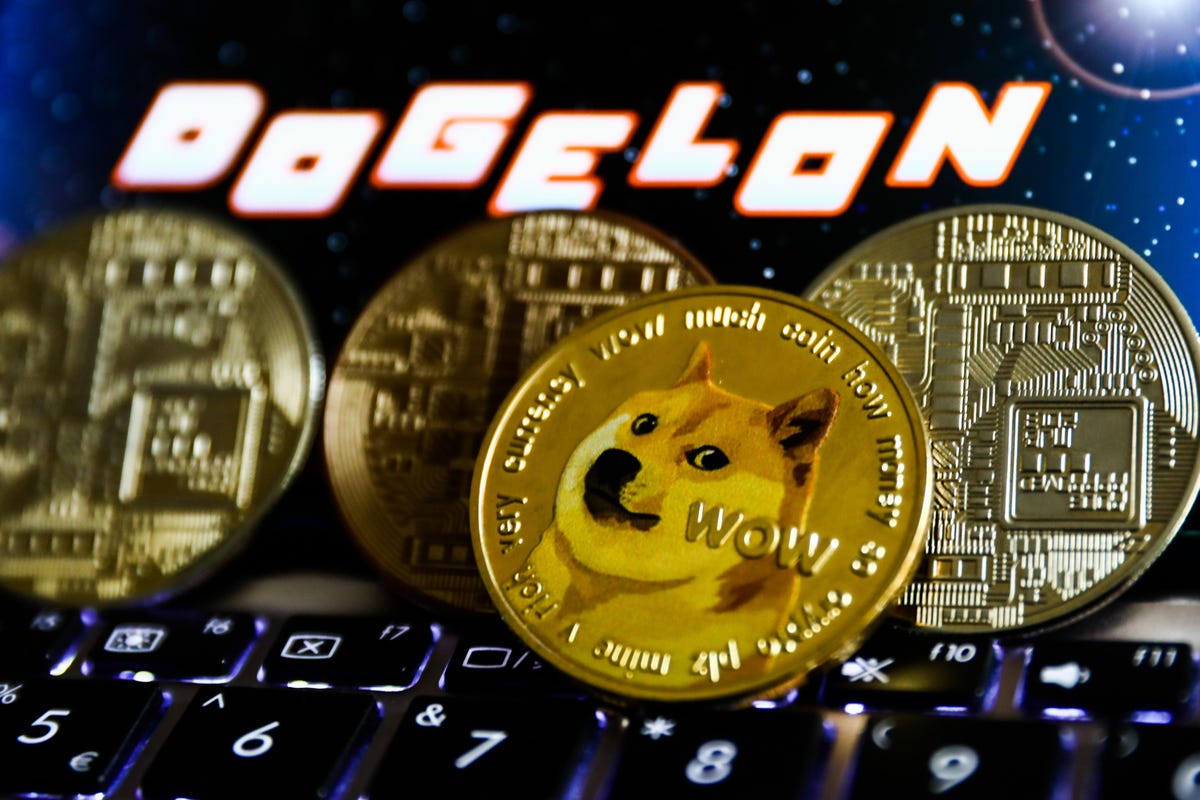 Dogelon Mars cryptocurrency logo displayed on a phone screen and representation of Dogecoin are seen … [+] in this illustration photo taken in Krakow, Poland on November 2, 2021. (Photo by Jakub Porzycki/NurPhoto via Getty Images)

Face it, Dogecoin DOGE is basically an investment in Elon Musk Tweets. It’s the only reason why us newcomers bought it in the last 12 months. It is the most famous of all meme coins, and is actually the 13th largest cryptocurrency by market cap, according to CoinMarketCap.

Of the top meme coins, all of them have some sort of relation to the Shiba Inu SHIB dog that everyone recognizes as the Dogecoin dog. The Shibu Inu coin (SHIB) is the second largest meme coin — and probably as useless as a crypto investment as the mother of all meme coins — Doge.

Still, laugh all you like. Doge is worth $17.9 billion and trades over $341 million a day. Shiba is worth around $14 billion and has a daily trading volume of $324 million. To put that into perspective, that gives both of those coins a market cap of two nearly two times that of AMC Entertainment (AMC) and 36 times the daily trading volume of Hyatt Hotels Corporation (H).

AMC and Hyatt are actual companies making and selling actual services. What do I get with my DOGE and SHIB?

On April 11, the Dogefather, Elon Musk, said that if he bought Twitter, maybe users can buy its premium service — Twitter Blue — and pay in Dogecoin.

Usually, when Musk talks about crypto, the price goes up. Dogecoin went down and is off by 7% since April 11.

Oddly enough, SHIB went the opposite way and rose 7%. Maybe SHIB is the high alpha on the meme coin index (if such a thing existed).

Investing in silly meme coins puts the investor at the whims of Musk, or of Discord, Reddit and WeChat banter.

The top two meme coins are in a bear market this year anyway, down more than 20%, though that’s not much worse than the Nasdaq.

Dogecoin runs on its own dedicated blockchain. In exchange for supporting the blockchain, miners earn Dogecoin which they can keep or sell. This is its main utility.

Shiba Inu is totally useless, and created by an anonymous developer in 2020 who probably had nothing to do because of the Covid pandemic. It was created to be the Dogecoin killer, and its white paper (called a “woof paper”) is famous for saying that their team never collaborated before. And that they love Shiba Inu dogs.

“We saw peak usage of the top meme coins on our platform back in May 2021,” says Ilya Volkov, CEO of Youhodler.com and a Crypto Valley Association Board Member from Switzerland. “But starting in December 2021 it’s been declining. If we consider meme coins as a form of ‘money’ — just with extremely high volatility — then they make the investing game more interesting and exciting.”

Top 5 meme coins by market cap and how they performed over a seven day period ending April 23.

One reason why Dogecoin is so cheap (almost always worth less than a penny since its inception in 2017 and up to the Elon bounce in 2021) is because there is no cap on the number of Dogecoins miners can churn out. Dogecoin is in endless supply, making it dependent on chat-room and funny social media influencers to temporarily drive up its value.

“It’s true that many memecoins have absolutely no utility — and no potential for utility. How could they? If it takes 5-20 minutes to use it to pay for something, and if it costs you several bucks to pay in terms of fees, it’s hard to see how many memecoins could gain widespread adoption,” says Tyler Miller, Head of Communications at Vita Inu. Yup. It’s a dog coin.

VINU is trying to be a meme coin with “actual utility,” Miller says. “We use it to pay for a bunch of things – from community contributors, to artists, to developers. I mean, if you had $5,000 to burn, then it means you are in a position to be adventurous – to take risks. Why would you invest conservatively in Bitcoin or Ethereum or anything similar? It would be more sensible to bet on projects with high potential but low market capitalization,” he says, like a meme coin. Like a Vita Inu.

Meme coins are often used to publicize and popularize a particular blockchain or network. They are used to hype up a community of developers and token holders within that community.

The very best meme coins will be attached to blockchain protocols and give retail investors the notion that they are actually investing in a real project, not some Discord joke.

“Without meme coins publicizing and popularizing cryptocurrency, do you think that so many people would now know about cryptocurrency?” asks Miller. “I don’t. Crypto would still be firmly in the domain of geeks and nerds,” he says.

*Sadly, the author does in fact own Dogecoin. He also owns Bitcoin.