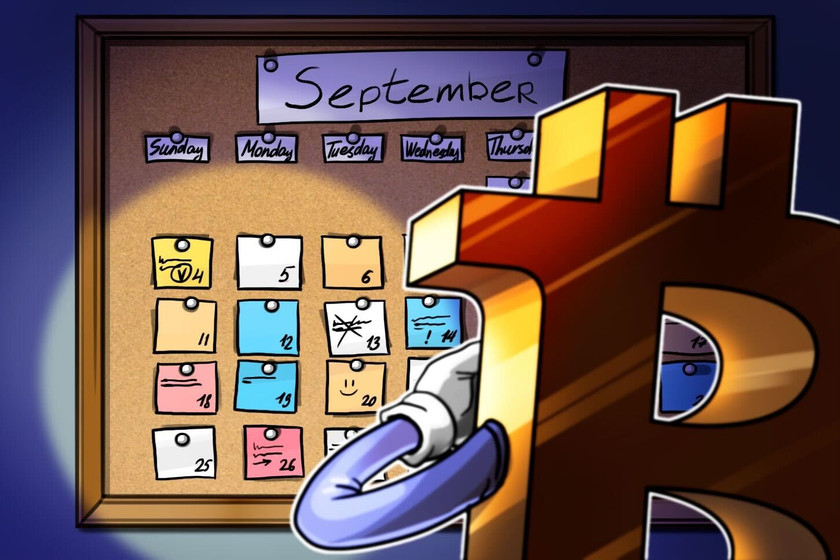 Bitcoin (BTC) bulls should not get excited about the recovery from the June lows of $17,500 just yet as BTC heads into its riskiest month in the coming days.

The psychology behind the “September effect”

Historic data shows September being Bitcoin’s most worst month between 2013 and 2021, except in 2015 and 2016. At the same time, the average Bitcoin price decline in the month is a modest -6%.

Interestingly, Bitcoin’s poor track record across the previous September months coincides with similar downturns in the stock market. For instance, the average decline of the U.S. benchmark S&P 500 in September is 0.7% in the last 25 years.

S&P 500 performance in August and September since 1998. Source: Bloomberg

Traditional chart analysts have dubbed this annual drop-off as the “September effect.”

Analysts argue that investors exit their market positions after returning from their summer vacations in September to lock gains, or even tax losses, ahead of the year’s close.

Meanwhile, they also note that individual investors liquidate their assets in September to pay for their children’s annual school costs.

Bitcoin’s correlation with the stock market has been largely positive during and after the coronavirus pandemic. Therefore, in addition to the September effect, these mirroring price trends could also increase BTC’s likelihood of dropping high in the ominous month.

So expect low volume, chop & random violent moves in either direction. The point of this post isn’t to fearmonger anyone. Always a green markets somewhere. I’m sharing insight on what to expect to save newer retail traders from excruciating pain. Be patient and embrace the suck

Bitcoin’s losses in 2022 were drawn from fears of the Federal Reserve’s rate hikes and the complete unwinding of its $120 billion monthly bond-buying plan to tackle rising inflation.

But the market’s narrative shifted to hopes that inflation had peaked. The belief strengthened after the July U.S. consumer price index (CPI) came at 8.5% versus 9.1% in the month prior, leading to speculations that the Fed would tone down its tightening plans.

It coincided with Bitcoin and S&P 500 recouping small portions of their yearly losses, as illustrated below.

But several analysts believe that Bitcoin’s recovery could be a bull trap, a “relief rally” that will trap investors who think the market has bottomed.

The psychology of a relief rally

Price gets just bullish enough to fool you that this rally is the real deal.

There could be an end to the pain.

Then BLAMO, the market rugs you shattering your hopes.

Expect this a few more times during the bear!#bitcoin #crypto

Moreover, most Fed officials still favor raising by 75 basis points at their next meeting in September, given their pledge to bring inflation down to 2%.

Related: Wen moon? Probably not soon: Why Bitcoin traders should make friends with the trend

From a technical perspective, Bitcoin will decline toward $19,250 by September if it breaks out of its current “bear flag” pattern. The bearish continuation setup is illustrated in the four-hour chart below.

Meanwhile, on the daily chart, BTC has been breaking down from its rising wedge pattern since Aug. 19. The bearish reversal setup’s profit target comes to be near $17,600, as illustrated in the chart below.

Overall, September looks like it could once again be a red month for Bitcoin based on technical, fundamental and macro factors.