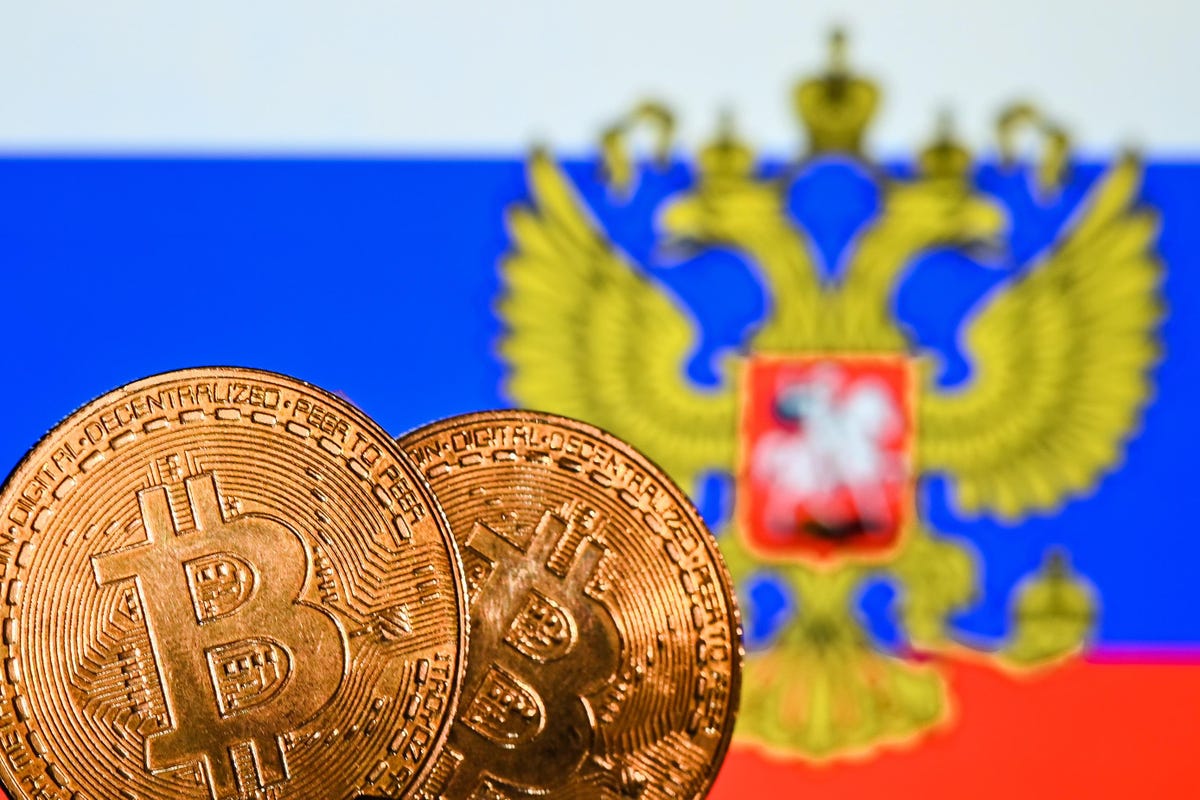 As known, Crypto doesn’t provide enough liquidity to allow Russia to bypass SWIFT sanctions in full. … [+] However, as Blockchain-based investigators review transaction spikes in different jurisdictions, evidence for sanction circumventions is collected and passed on to the legislators to take additional steps. (Photo by Artur Widak/NurPhoto via Getty Images)

As stated by the Russian Prime Minister in a recent government report, Russians hold $130B in Cryptocurrencies, which is an equivalent of half of Finish GDP in 2020. This is still $84B less than an estimation released by the Kremlin at the beginning of February 2022. Increased traceability of transactions on the blockchain allows opening of a new frontier to investigate Russia’s possible sanction evasion tactics using cryptocurrencies.

As described in previous articles on blockchain based investigations, the industry, regulators and legislators have come a long way since the creation of the first visualization tools to spot, cluster and allow law enforcement to seize outstanding transactions.

“The increased transparency of the blockchain provides undervalued opportunities for the public and private sectors to detect and prevent illicit activity – including sanctions evasion – and to collaborate across borders.” – Scott Johnston, Senior Solutions Architect, Chainalysis and former law enforcement

Limited amount of liquidity in the DeFin space, a growing number of blockchain based investigators, a range of legislations from the latest Anti Money Laundering directives of the EU, and the implementation of FATF travel rules, make sanction evasion somewhere between very costly to impossible.

However, due to a lack of sufficient liquidity, it remains impossible to source funds needed to operate a country on the blockchain. Individuals could still however try to bypass these limitations by adapting the sanction evasion strategies traditionally used for banking sanctions. An extensive body of academic literature exists on such potential sanction circumvention strategies that could easily be adapted to blockchain based finance. Using shell companies, power of attorneys, trustees are just some of such techniques.

Here are some of the most easily implementable blockchain based sanctions:

So far, there are 623+ cryptocurrency platforms operating under Russian & Belarusian jurisdictions, or at least associated with those countries. Similar to stopping Russian bank’s access to SWIFT, cryptocurrency brokers can be and already have been sanctioned.

Sanctioning such platforms limits not only traditional bank & card transactions to and from such transfers, but all the transactions already conducted by them on the blockchain. Sanctioning of high-risk cryptocurrency brokers is not new. Platforms like Garantex, Hydra and Chatex have been already sanctioned for ransomware enabled under OFAC sanctions.

Even though this measure seems to be the easiest to be imposed by legislators, there is a need to clarify the reporting between cryptocurrency brokers and units of the Police which are responsible to process such reports.

Unlike traditional finance, at the current stage in blockchain-based compliance programs, even if a user conducted a 10k USD transaction on a cryptocurrency and 5 USD ended up at a sanctioned entity, the blockchain-based analytic system would raise an alarm to trigger manual review most likely, the crypto broker will also have to file a Suspicious-Transaction-Report (STR) to the police.

So, even if the flagged cryptocurrency wallet was not owned by the same user, the compliance teams in most jurisdictions would in fact file law enforcement reports and the customer will be blocked to conduct transactions. Such over-reporting wastes valuable resources of the already mostly overloaded Financial Intelligence Units (FIUs) of the police, which are processing such reports in most of the jurisdictions. A lack of international standards in STRs reporting of blockchain based transactions remains one of the obstacles in efficient blockchain-based compliance.

“While monitoring the blockchain. We have collected strong evidence for circumvention of sanctions by Russians and shared some of it with authorities that might result in future sanctions. Our work is at the beginning, and as blockchain transactions are visible and traceable, we see for sure more than they want us to see.” – Oleksii Fisun, CEO of Global Ledger

Companies which reach a certain threshold of Russian or Belarusian individuals who hold Ultimate Beneficial Owner level of 10%-25%, depending on the jurisdiction of capital or voting rights in the underlying entity, might not be awarded financial licences.

Companies which already hold a financial license, primarily in the DeFI space, and have Russian or Belarusian UBOs, or are financed by so called Gray eminences might be placed under audit, performed by for example Financial Supervisory Authorities. While reviewing proof of funds of companies, there might be a need for a compliance team to review to ensure that Russian or Belarussian capital providers will not hold a position of so-called ‘Gray Eminences’ by offering large loans to entities.

Even though Estonia has taken recent significant steps to enhance its cryptocurrency brokerage licensing process, there are a significant number of service providers, similar to this one, which are offering nearly off-the-shelf cryptocurrency broker licenses which include EU based bank accounts, as a package. Even though the financial authorities will perform a due diligence on the new management, members purchasing a majority ownership of the ‘off the shelf’ crypto brokerage are still a potential risk.

“There is a real need to enhance and clarify guidance on how blockchain-based sanctions should be reported to Financial Intelligence Units. On the blockchain, there might be multiple cryptocurrency wallets for the same individual, holding smaller amounts of money. A lack of clear guidelines on the European level might flood the FIUs with spam reports. e should draft clear guidelines before it happens” – Che Sidanius, Co-Founder of Global Coalition to Fight Financial Crime

is already enforced as Cryptocurrency Brokers, or so-called Virtual Asset Service Providers (VASPs) have a regulatory obligation to perform sanction screening on individuals that are being processed on their platforms.

The process works well, as long as the individuals exchange crypto and their Fiat currency using a traditional bank account or credit card payment.

The downsides of this solution is based on the difficulty to control funds if they already have entered the DeFin space, before the shady individuals were sanctioned. If the money has left the traditional banking system, these individuals can fairly easily try to evade sanctions using decentralized exchanges, mixers, tumblers, purchase NFTs or privacy coins. If such users made an informed decision of avoiding DeFin products from jurisdictions that have already implemented the FATF travel rule or made crypto-to-crypto transactions subject to anti-money laundering regulatory, then the likelihood of tracing such funds across multiple different cryptocurrency exchanges might be more time and resource intensive, but not impossible.

After Visa V , Mastercard MA and American Express AXP suspended their ties to Russian banks, there are still platforms which are allowing users to top up with Rubbel based bank transfers from Russia, both with national bank transfers as well as international transfers from Russia. Only a limited number of banks have been cut off from SWIFT. Furthermore, even if in limited scope, Russia is using its own card payment system, that is paradoxically called peace (rus. MIR). Providers and platforms that offer selling of DeFin products ranging from stablecoins to NFT offering Russian cash in or cash out possibilities could face a choice of shutting those transactions down or risk being sanctioned.

In the past, energy rich countries like Iran that have been sanctioned, were able to purchase crypto mining equipment on a massive scale and power its mining centers with cheap energy, to mine cryptocurrency currency. As of August 21, data from Cambridge Bitcoin BTC Electricity Consumption Index shows that Iran has an average monthly hash rate share of 3.11%, a nearly 100% increase since 2019.

Mining is defined as a low-risk factor in most of the so-called Risk-based-approaches (RBAs) of compliance teams of VASP. Such funds could be cashed out in third countries and layered into the traditional financial system. We need to limit the sale of mining equipment and its components to Russia due to its capability to convert natural resources into energy. Even though Belarus relies heavily on Russian energy and might be less likely to invest in mining equipment, it has been a known location for sanction evasion historically. Around 2014, this landlocked country was the biggest exporter of Salmon to Russia. The suppliers imported the Norwegian fish in Belarus and processed it before exporting to Russia, thus circumventing the legal loophole. As a result, the salmon did not disappear from Russian supermarkets.

Sanctions can only work if those who are supposed to comply with them understand exactly what to do. The current regulation brings up a few questions when it comes to enforcing the limits in practice.

There is an urgent need to further clarify the €10,000 limit that has been released already. In the fifth EU sanction package on Russia it limits the crypto asset holdings of Russian nationals, individuals and legal entities established in Russia to €10,000 (with the same account, wallet or custody provider), the crypto sanctions are both measures and evidence for the fact that sanction evasions have been limited.

As Cryptocurrencies or other DeFin assets remain highly volatile, it is nearly impossible to predict the value of digital assets a customer should store in his wallet to not breach the €10,000 limit, and how should a virtual asset service provider interpret this prohibition?

In an official request sent to the EU to further clarify this sanction to make it enforceable for cryptocurrency service providers – the answer provided doesn’t clarify or even answer the question.

“Crypto assets service providers are now required to come up with their own interpretation and safeguards, but without official guidance, it is highly unlikely that we will see a unified application, which likely reduces the efficiency of the sanction itself.” – Dora Kadar, Nordic Assignee, Kassai Law

Considering the fluctuating value of cryptocurrencies, this sanction is far from clear, and brings up additional questions, e.g., what should happen in case the crypto assets, at the time of deposit, are worth less than the threshold, but their value increases in the meantime.